An ionic bond is the result of electrostatic attraction between positively bonding occurs most easily when elements with low ionization energies (metals) react with elements with high electronegativities and high electron affinities (nonmetals). the atoms of different substances and elements combined each other in a stable state to make the molecules of. chemical compounds.

there are many ways to do that for different atoms having different structural characteristics of every atom. on the other hand, we know that the nucleus has a positive charge is surrounded by a cluster of negatively charged electrons. this negatively charged cluster of electrons remains always closer to the nucleus with the help of the electromagnetic force of attraction between these particles.

now from here, all elements are not equal to each other. the elements having low ionization energy tends to lose electrons to their nearest element. while some of the elements gain electrons having high electron affinity.

this phenomenon was discovered by Lewis and followed according to the Lewis octet rule. if 8 electrons are present in the outermost shell or orbit the molecule or element will be stable.

Reactions between metals and charged cations a negatively charged anions, which can be formed by the transfer of o 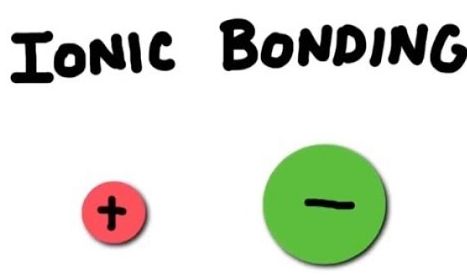 ne or more electrons from one atom or group of atoms to another electrostatic attraction between the cation and anion- produced by electron transfer from one atom to another atom are called the ionic or electrovalent bond.

Ionic nonmetals often result in the formation of ionic compounds. Consider the reaction of sodium (a Group I A metal) with  chlorine (a Group VII A nonmetal) to form sodium chloride

In this reaction, we can picture three major transformations:

Sodium atom loses one electron to form sodium ions, Na+, to attain the noble gas ‘neon’ electronic configuration. The energy required for the formation of Na+’ ions from Na. the gas phase is 496 kJ/mol which is simply the first ionization energy of Na.

Yet we have described these two processes as occurring simultaneously. The electron is removed from the sodium atom and is transferred to the chlorine atom.

It is often said that NaCl is a stable compound because both the Na+ and  Cl­ ions in NaCl have the stable electronic configuration of a noble gas. However, the energy data cited above show that the completion of noble gas shells cannot account for the stability of NaCl.

We find that the process in which an electron is transferred from a gaseous Na atom to a gaseous Cl atom requires an input of energy 147 kJ/mol.

The energy gained by the Cl atom is less than the energy cost of removing an electron from a Na atom. Such an unfavorable energy balance is not unique to NaCl.

In fact, there is always an unfavorable energy balance in the formation of a pair of ions. Thus, an input of energy is always needed to form an anion and a cation from a pair of elements.

Therefore, two separated ions, Na+ and Cl- ions come together, the mutual electrostatic attraction between the ions so formed, releases energy 585 kJ/ mol and thus an ionic bond is established.

This energy release is more than offsets the 147 kJ/mol required to form the ions. The release of energy results from the electrostatic-(coulombic) attraction of the oppositely charged ions when the distance between their nuclei is reduced to about nm in NaCl(g).

The overall reaction can be represented as:

the “18 + 2” electron configuration, In ion formation among some transition metals, the outer shells electrons and some number of d electrons are ionized producing the configuration as given below: These metals form ions with variable

So far, we have assumed that ionic compounds exist as ion pairs in the gas phase. In fact, they do not. Under normal conditions, ionic compounds are solids. Since electrostatic attraction between oppositely charged ions is independent of direction.

Therefore, the ions will be in contact with a number of oppositely charged ions around them in all Like-charged ions, because of their mutual repulsions generally are not in direct contact.

Therefore, in the solid-state, single ionic molecules do not exist in the gas phase.

Rather many positive and negative ions are arranged orderly in an alternating cation-anion_ pattern in a three-dimensional arrangement called the crystal lattice.

When an ionic lattice forms from isolated gaseous ions, energy is released. The number of nearest neighbors of each ion in a lattice is called the coordination number.

X-ray diffraction studies show that a crystal lattice can be represented as made up of spherical ions. The relative number of the cations and anions and their sizes play an important role in establishing the geometry of the crystal structure.

In order to simplify the job of describing a crystal lattice, it is useful to specify the unit cell of that lattice.

The unit cell chosen must

The smallest structural unit (which can be atoms, ions, or molecules) that are repeated in a three-dimensional pattern to form a crystal lattice is called the unit cell. The “unit cell” is defined by the lengths of edges and the angles between them. There are seven types of unit cells known: cubic, tetragonal, orthorhombic, monoclinic, triclinic, hexagonal, rhombohedral.

Ionic compounds can be classified according to stoichiometric proportions of the cations and anions as 1:1, 1:2, etc and compounds with each classification often have crystallographic in common.

Measurement of mass volume time and temperature in chemistry