According to different scientists, there are three main branches of science: Earth science, physical science, and life 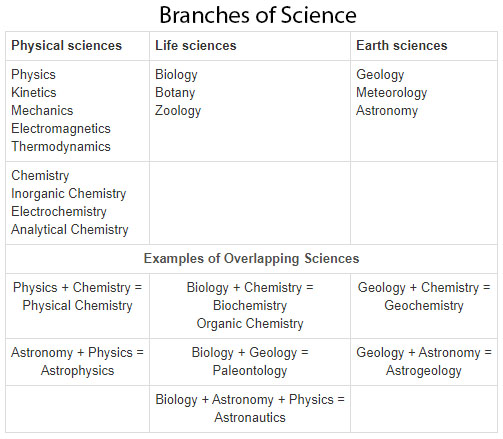 science. earth sciences typically deal with the study of solid earth e.g air and water. it also classified into many other sub-branches like atmospheric science, geological and hydraulic sciences, etc.

to dig deeper into branches of science, let’s quickly look at the definition of science.

the word “Science” is derived from the Latin meaning “to Know”.Science is a way of knowing or study of nature. science emerges from our curiosity about ourselves, the world, and the universe. In general, it means describing realities and providing answers to the various questions of human thinking by systematically ordered knowledge of anybody.

The significance of Studying Science

What are the 7 sub-branches of Science?

the major science branches are further subdivided into many other sub-branches and disciplines. bellow we have some examples and sub-branches with definitions.

chemistry is that branch of science that is dedicated to the study of the structure, properties, composition, and transformation of matter after undergoing various processes or reactions that affect its molecules and atoms. it is an experimental science that studies matter, its properties, and its changes in nature. And is that all matter is made up of simple chemical elements or their compounds, each with its own differential characteristics.

It is worth mentioning that matter is everything that surrounds us, composed of molecules and atoms that react to various chemical changes, and that it can be related to the release of energy in some cases.

Chemistry studies are conducted in laboratories and use the scientific method. This has allowed the discovery of various subjects, their compositions, how they are related or transformed. Hence, elements that are basic in other scientific studies have been discovered.

Examples of Sub-Branches of Chemistry

Chemistry is the study of the composition of substances and how they interact with each other.
It covers topics such as:
▸ How the chemical and physical properties of substances are determined by their structure at an atomic scale.
▸ How substances can change the form, such as between solid, liquid, and gas, as well as through processes such as dissolving.
▸ How substances can interact and their particles rearrange to form new substances.
▸ Energy changes involved in physical and chemical processes.
▸ The classification of matter into groups such as elements, compounds, and mixtures.

Examples of Sub-Branches of Physics

Physics is the study of natural phenomena from the smallest sub-atomic particles to entire galaxies.
It covers topics such as:
▸ The motion and interaction of moving objects.
▸ Forces such as magnetism, gravity, and electrostatic forces.
▸ Waves, including light, sound, and electromagnetic radiation.
▸ Energy and heat, and how they can be transferred and transformed.
▸ Electricity and electrical circuits

Examples of Sub-Branches of Biology

Examples of Sub-Branches of Earth Science

Earth science is the study of Earth, including its oceans and atmosphere, as a system.
It covers topics such as:
▸ The formation of the earth.
▸ The structure of the earth, including the different types of rocks.
▸ The processes involved in shaping the earth, such as plate tectonics, weathering and erosion.
▸ The resources of the earth and the influence of human activity.

Examples of Sub-Branches of Space Science

Interdisciplinary Sciences
Science isn’t always easily divided into branches as there is much overlap between them.
For example, astrobiology, geophysics, and biochemistry don’t fit neatly into any of the five main science disciplines, but rather overlap between them.
Such areas of science are known as interdisciplinary sciences.
Branches of science may also overlap with subjects outside of the science field, such as mathematics, social sciences and philosophy.
Examples of such interdisciplinary fields include engineering, psychology, and bioethics.

Back to top button
Close