A parabola and a hyperbola are both conic sections, which are shapes that result from the intersection of a plane 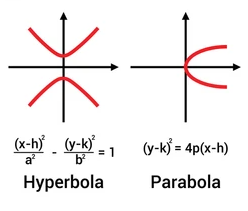 while working on planetary motion, Kepler studied the orbits of planets as an ellipse. later on, Newton contributed his research and modified Kepler’s findings by saying that orbits actually are special conic sections e.g. parabola and hyperbola.

According to the research of Kepler and Newton, there are many similarities and differences between the parabola and the hyperbola. both geometric figures help to solve geometric problems concerned with conic sections.

let’s cut a solid figure like a cone. we obtained a conic section as in the above picture. a section is a surface made on the surface of the solid figure with a plane. there are different figures that can be obtained such as circles, ellipsis, hyperbolas, and parabolas that are highly dependent on the angle of intersection between the axis of the plane and cone.

when we divide a plane or flat surface into a conic shape, a parabola is formed. it is a surface parallel to the side of the cone and called the conic” section (curved, like a U-shape). on the other thing is important to remember that if we take any point from the parabola, the line from that point to the x-axis will always be equal to the focus or center point of the parabola.

both edges of the parabola curve will extend to infinity while their flat point can touch single, twice, or not a single time to the x-axis.

when we divide a cone into a conic section a hyperbola or conical section is formed which always remains parallel to its axis. it can be seen as two different identical branches with the same sizes and shapes like the English word “U”. both shapes are oriented in opposite sides or directions.

When are they formed?

the above two figures are formed when we graph a quadratic equation in which the variables are raised always in the second power of the square. it also remains on the second degree that does not go at a higher value than 2 like cubed or to any greater power.

parabola has one focus point. on the other hand, a hyperbola has two focus points that are mirror images of each other or places in opposite directions to each other.

we talked earlier in this article about the eccentricity of parabolas and hyperbolas. le’s known what is it.

it is the measurement of the deviation of any orbit of a shape. in other words, it measures how much a shape deviated from being a circle. a pure circle has an eccentricity equal to 0. if the circular shape deviates into an ellipse, the eccentricity will increase from 0 to a greater value.

the parabolic shapes have eccentricity always equal to 1 while hyperbolas have more than 1. look at our planet’s system. there is neither a parabola nor a hyperbola. they are almost similar to circular shapes.

Equations of Parabola and Hyperbola 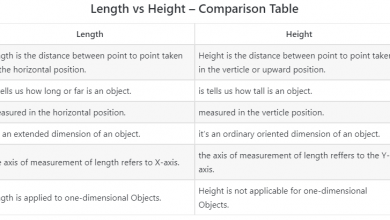 Difference between Length and Height