Area and volume are both measurements used in mathematics and physics, but they are different in their meaning and application. 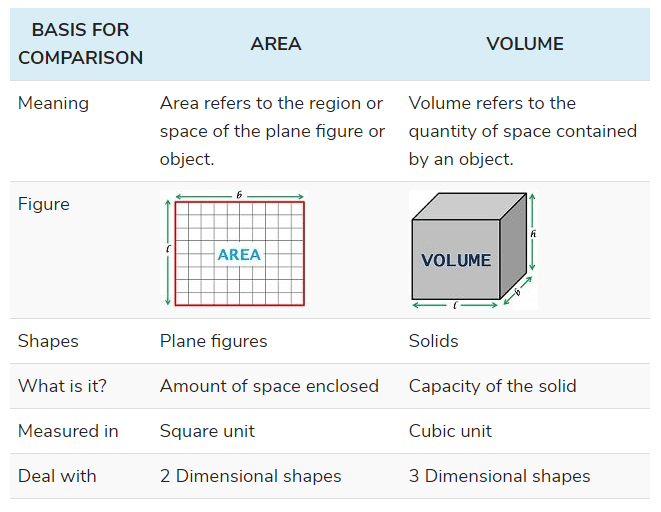 In this article, you are going to learn a complete explanation of the difference between Area and Volume in detail.

So if you want to get benefits from this post you’ll love this article.

we often see plenty of objects in our daily life. some of them occupy volumes while others have an area. but commonly we do not recognize or distinguish them easily. hence, People are often confused regarding the two terms area and perimeter because they look like same when measured or highlight similar meanings from their names. but they are not.

What is the definition of Area?

in mathematical geometry, the size of any object is called the area of that object. since it is a two-dimensional region enclosed by a 2D closed figure. we can easily calculate it by using the square formula or simply by multiplying all of the sides of an object.

it tells us that how many squares of equal length can fit into a closed figure. we use square units to measure the area in the international system of units. for example, centemiter², milimeter², feet², etc.

How can we find the area of a shape?

as we know area always deals with flat shapes that has always two dimensions i.e., width and length. a square always has equal 4 sides which means it has an equal length for all its sides. like a square, the ellipse has also equal width and height.

by using a coordinate plane, we can easily divide these shapes into small unit squares. there are multiple square units we use to measure the area such as millimeters, centimeters, etc.

Whether finding the area of any two-dimensional shape like a rhombus, trapezium, or quadrilateral we can use the known square units.

how to find the Area of Squares and Rectangles?

as rectangles and squares are simple shapes that can easily convert into small unit squares, we need only the length and width of these shapes to find the area like:

let us take a real-life example. suppose that we have a rectangle that is 180 meters wide and 300 meters long. what will be the area of that rectangle?

we can shorten the square formula for more ease. because all sides are equal in length, hence, we can write as A= s². for example, we have a square 45cm long. how can we calculate its area?

How to Find the Area of a Circle?

shapes like circles and ellipses are not considered polygons but involve a radius called “r”. we can find the area of these shapes by using the following formula:

How to Find the Area of an Ellipse?

What is the definition of Volume?

in mathematics, the three-dimensional quantity occupied space by a closed surface or boundary e.g. solid, liquid, or gas is known as volume. for example, a petrol tank can have a capacity in the volume of 10 liters to refuel it.

we use multiple units of cubes derived from SI units like cubic meters, liters, barrels, and gallons, etc. to express the volumes of different quantities. hence, the SI unit for volume is a cubic meter or m³. however, the common unit of volume we use in our daily life is litter (L).

Difference between Rhombus and Square