The cations are formed when atoms lose electrons from their outermost shells. for example, Na+, K+ are cations. The following equations show the formation of cations from atoms. 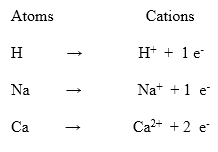 What are molecular ions?

What are Free Radicals?

Free radicals are atoms or groups of atoms possessing an odd number of (unpaired) electrons. It is represented by putting a dot over the symbol of an element e.g. H. , H. ,H3C. .

Free radicals are generated by the homolytic (equal) breakage of the bond between two atoms when they absorb heat or light energy. A free radical is an extremely reactive species as it has the tendency to complete its octet.

Most of the universe exists in the form of plasma, the fourth state of matter. Both the cationic and anionic molecular ions are present in it.

How to write a Chemical Formula for Ionic Compounds with examples