“A chemical bond is defined as a force that holds two or more atoms together as a stable molecule”. Electrons play a key role in the Electronic Theory of Chemical Bonding.

The attractive forces exist between atoms. The molecules of chemical substances are made of two or more atoms joined together by some force,  among atoms. The forces that hold atoms together in stable molecules are referred to as chemical bonds.

In 1916, they put forward the electronic theory of chemical bonding. It states that chemical bond formation atoms interact by losing, gaining, or sharing of electrons so as to achieve a stable noble gas configuration. Thus molecules are formed by redistribution of electrons between two or more atoms.

When two-atom- approach each other, one possibility is that they repel each other. The repulsion increases with a decrease in distance. This will result in an increase in the potential energy of the system as shown by curve B.

The system will be unstable and the atoms will tend to move away from each other toward an infinite separation to attain lower potential energy. The other possibility is that the two atoms attract each other as shown by curve A. The potential energy of the system decreases with the decrease in the distance between them.

However, after a certain limit, the forces of repulsion again begin to dominate resulting in a sharp increase of the potential energy.

The potential energy is minimum at an equilibrium bond distance ‘Re‘ where the two atoms are held together very firmly with the maximum possible decrease in energy.

At this ‘Re‘ the molecule attains maximum stability and a chemical bond is formed. At distances shorter or longer than ‘Re‘ the energy will be higher and the molecule will be unstable.

There are five types of bonds recognized by chemists: 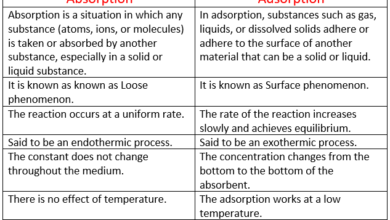 What is the Difference between Absorption and Adsorption?

What is the Difference Between Fluid And Liquid?