Energy is the ability of a force for different bodies to work or to take action for producing changes into themselves or other bodies. it is measured by an SI Unit joule (J). Thermal energy, Mechanical Energy, Electromagnetic energy, Magnetic energy, Chemical energy, Windpower Energy, Solar energy are some common Types of Energy. however, all energy types are sprouted from two major types known as kinetic energy and Potential Energy.

it is the ability of bodies or a force to do work or generate a function due to its movement (kinetic energy) or its position (Potential Energy) or internal energy. physics and chemistry majorly dependent on energy. energy is also the key factor of human development.

Important Tip: According to first law of thermodynamics the interconversion of energy from one form to another is possible while it can’t be created or destroyed. The total energy of an isolated system remains constant.

energy can exhibit itself in many different ways. these are known the forms or types of energy which are highlighted in the following:

According to Physics, kinetic energy is an energy of a body possessed because of its relative motion. in other words, the work done by a body to accelerate a mass from rest to a certain speed is known as kinetic energy. once a body achieved its kinetic energy during the acceleration, it maintains its energy until we change the speed. it is denoted by the symbol Ec and sometimes we also use T and K as well. the SI unit of kinetic energy is also  Joules (J). 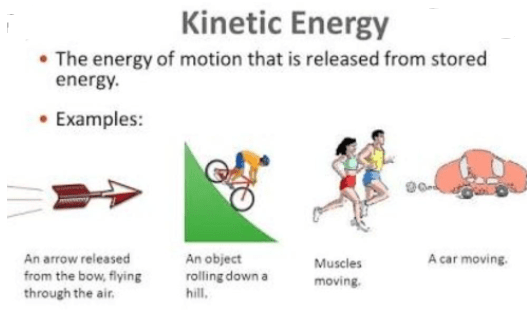 there are two major types of energy kinetic energy and potential energy. the potential energy is the stored energy in an object and is dependent on the position of that object with respect to another object. it can also be transformed into other various forms such as kinetic or caloric etc. 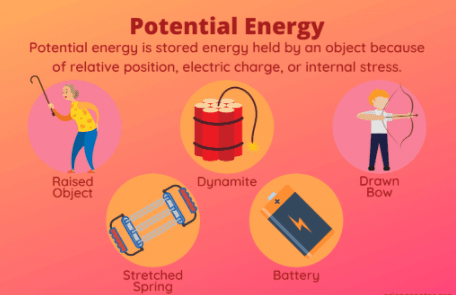 atomic or nuclear energy is the energy that is obtained from the nucleus of the atoms by a spontaneous or artificial nuclear reaction. it can be used to produce electricity as well and can be obtained in two major ways either nuclear fusion or nuclear fission.

the energy derived from light or electromagnetic waves. it is also called radiant energy.

the sum of kinetic energy and potential energy is called mechanical energy. it is associated with the movement of an object.

it is produced due to the difference in temperature between the two systems.

the energy sourced from the sound waves is known as sonic energy. this energy is got when sound waves are traveled through the air or any other medium.

the energy produced by gravity is called gravitational energy. when the attraction between two objects due to their mass happens, this form of energy is produced. it is highly dependable on the mechanical forms of energy such as potential and kinetic.

it is the energy that binds electrons tightly to the nucleus with atoms, molecules, or ions.

What are some properties of Energy?

there are 4 basic properties of Energy:

Energy transformation can be made with the help of three ways that are given below: