History of the atom

since the discovery of the atom, it was thought that matter is made up of simple, indivisible particles. Greek philosophers thought that, matter could be divided into smaller and small particles to reach a basic unit, which could not be further sub-divided. Democritus (460-370 B.C) called these particles atoms, derived from the word ‘’atomos’’ means indivisible. However, the ideas of Greek philosophers were not based on experimental evidences.

In the late 17th century, the quantitative study of the composition of pure substances disclosed that a few elements were the components of many different substances. It was also investigated that how elements combined to form compounds and how compounds could be broken down into their constituent elements.

In 1808, an English school teacher, John Dalton, recognise that the law of conservation of matter and the law of definite proportions could be explained by the existence of atoms. He developed an atomic theory; the main postulate of which is that all matter is composed of atoms of different elements, which differ in their properties.

What is the definition of atom

an atom is the smallest possible particle of an element that can take part in a chemical change.

Atom is the smallest particle of an element, which can take part in a chemical reaction.

For example, He and Ne, etc. Have atoms, which have independent existence while atoms of hydrogen, nitrogen and oxygen do not exist independently.

The modern researchers have clearly shown that an atom is further composed of sub atomic particles like electron, proton, hypron, neutrino, anti-neutrino etc. More than 100 such particles are thought to be exist in an atom. However, electron,proton and and nuetron are regarded as the fundamental particles of atom.

A swedish chemist J. Berzelius (1779-1848) determined the atomic masses of elements. A number of his values are close to the modern values of atomic masses. Berzelius also developed the system of giving element a symbol.

Evidence of the Atom

It is not possible actually to see the atoms but the nearest possibility to its direct evidence is by using an electron microscope. A clear and accurate image of an object that is smaller than the wavelength of visible light, cannot be obtained. Thus an ordinary optical microscope can measure the size of an object up to or above 500 mm (1nm=10-9m). However, objects of the size of an atom can be observed in an electron microscope. It uses beam of electrons instead of visible light, because wavelength of electron is much shorter than that of visible light.

Bellow electron microscopic shows photograph of a peice of a graphite which has been magnified about 15 millions times. The brighter band in the figure are layers of carbon atom.

All elements are made up of atoms. The atoms of one individual element are identical in very respect, and differ from the atoms of all other elements. Atoms are made up of sub-atomic particles called protons, neutrons and electrons.

Every element has its own proton number (Z) and nucleon number (A).

The nucleon number of an element is the total number of protons and neutrons in its atom.

To represent these number, we write:

From this, we can deduce that a sodium atom has 11p, 11e and 12 n. In the next table the number of sub-atomic particles is worked out in a similar way, for the first twenty elements listed in the periodic table. 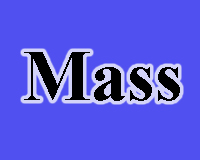 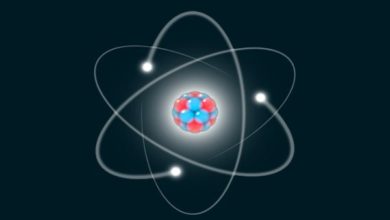