Any substance that can flow or have the tendency to flow is known as fluid. for example water and noble gases. there are many types of fluids in mechanics and each fluid has some characteristics and properties such as Mass Density, and Viscosity, etc. from the states of matter, only liquids and gases belong to fluids. in this article, we are going to discuss the properties of the fluid in detail. 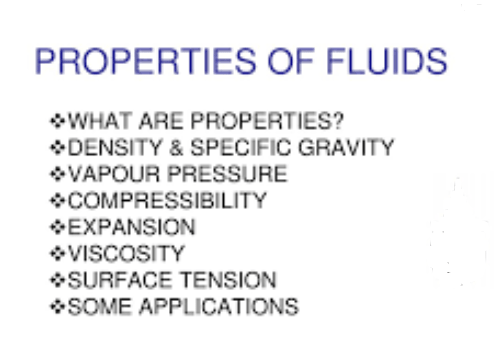 as each fluid differs from the other due to its composition and properties. also, some properties are common in many of them. when we categorize them broadly, they can be divided into three major types of properties:

however, in general, there are 15 major properties of fluids which are listed below:-

Let’s discuss each property of the fluid in detail.

the resistance to flow in any substance is known as viscosity. due to the viscosity, many liquids like honey and mobile oil, etc, flow steadily as compared to water. it is the resistance between particles of liquids or fluids. the measurement of this internal resistance of particles is actually called viscosity.

you can read here about Types of viscosity

density is also known as mass density is the ratio of a mass of fluid to its volume. it is a mass per unit volume of a fluid and is dependant on pressure and temperature on fluid. density is expressed by a symbol ρ having an SI unit (kg/m3). for example, the density of air is 1.225 kg.m-3.

specific weight is also known as weight density. it is the ratio of the weight to the volume of the fluid. in other words, how much weight possessed by unit volume. it is measured as per unit volume and denoted by ‘w‘. the SI unit of specific weight is (N/m3).for example the specific weight of water is 9.81 × 1000 N.m-3. it is dependent on acceleration due to gravity which may vary at different places. 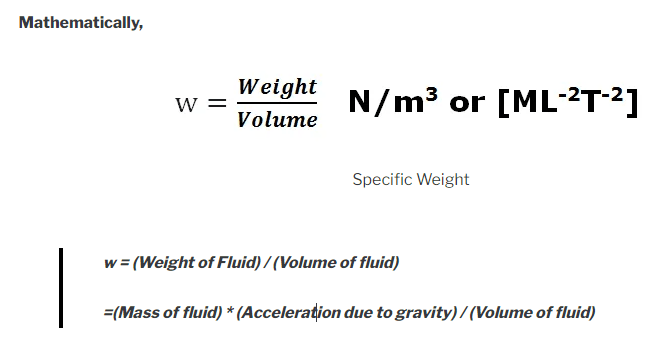 the ratio of the volume and the mass of fluid is called Specific Volume. it is the reciprocal of density. in other words, the volume that a fluid occupies per unit mass is known as specific volume. the SI unit for a specific volume is m³/kg (cubic meters per kilogram).

the capacity of fluid to be flattened or reduced in size or volume by applying external pressure is called compressibility. it is a measure of the relative volume change of a fluid by changing its pressure by some external means. mostly, it is denoted by denoted β and can be expressed as the following relation:

where k is compressibility, v is volume and p is pressure.

It is a force applied by it per unit area on fluid or compressive stress at some point within a fluid. the pressure of fluid can be seen in two different situations i.e., as open channels such as ocean, river, or swimming pool while in the close channels such as a pipeline or gas line.

the process of formation of vapor bubbles or vapor-filled cavities in which the static pressure of the liquid reduces to below the liquid’s vapor pressure is known as cavitation.

What are five properties of fluids?

What are some properties of fluids?

What are the 3 properties of liquids?

What are the mechanical properties of fluids?

What is the study of properties of fluid in motion is called?

How is fluid properties measured?

while measuring the fluid properties we use two things. 1st. calculate flow rate by using equation Q = V x A and 2nd. density and friction of the fluid in contact with the pipe. these are the factors affecting the rate of flow through a pipe.

Difference Between Metallic and Non-metallic Minerals