Despite the information available about the surface of the earth, little is known about the state and composition of its interior. Our knowledge of the deeper interior relies on indirect evidence from the physical measurements of the earth’s mass, volume, density, temperature and seismic waves that have passed through the deep interior. Seismic waves are produced by earthquakes.

how does the structure of the earth’s interior effects seismic wave speed and direction?

Seismic waves passing through the earth’s interior have revealed two major and three relatively minor discontinuous where changes in chemical and physical state occur. This data also helps to determine the density and the elastic properties of the materials through which the waves pass, properties that govern wave velocities. 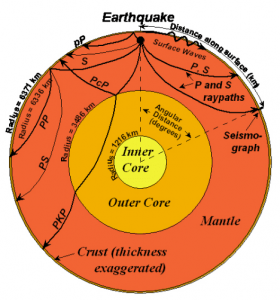 The seismic discontinuities are broadly concentric with the earth’s surface; they, therefore, mark the boundaries of spherical shells with successively greater density. The major subdivisions into crust, mantle and core at the Mohorovicic and Gutenberg discontinuities.

The crust varies in thickness from about 8 kilometres ( 5 miles) in the areas of the ocean to about 40 kilometres (25 miles) under the continents, and the mantle extends down to 18,00 miles (2900 kilometres).

It contains a low-density layer that lies between 30 and 125 miles below the surface, where seismic waves velocities and reduce by a per cent, and it is the most prominent and shallow beneath ocean areas.

The mantle also has a transition zone from 402 to 966 kilometres deep, which is categorized by several sharp increases a wave velocity and density with depth.

The earth’s core is subdivided into the outer and inner regions by a minor discontinuity at a depth of about 3200 miles (5150 km), the outer core is believed to be the only totally fluid layer in the earth.

here’s a video explains how the earthquakes occur 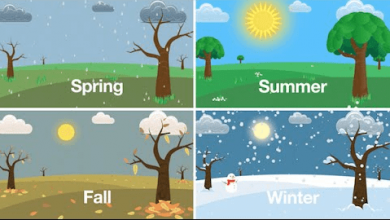 4 earth seasons of the year and What causes seasons to change? 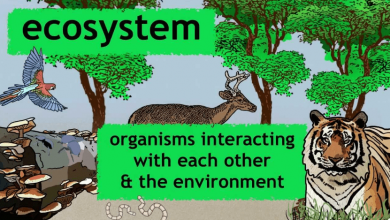