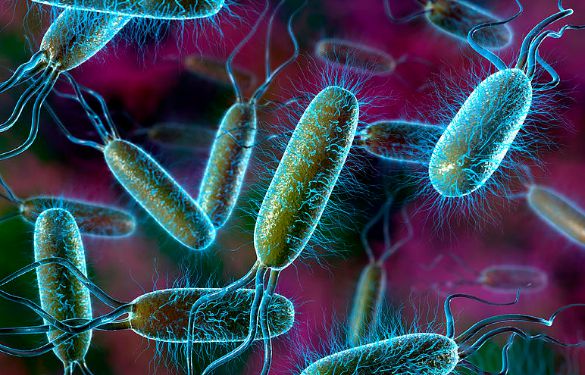 The size and shape vary in different bacteria. Their size is from 0.1 to 600µm over a single dimension.

Bacteria are classified in to three categories on the basis of their shapes. These shapes are cocci, bacilli and spiral. Most of the bacteria have constant shapes. Some bacterial cells are pleomorphic and exist in different shapes. 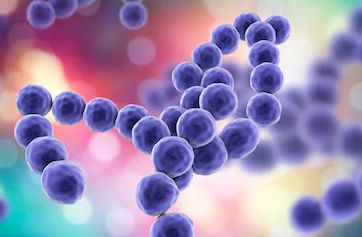 Cocci are spherical or oval bacteria. They have different arrangements. These arrangements are based on their plane of division. 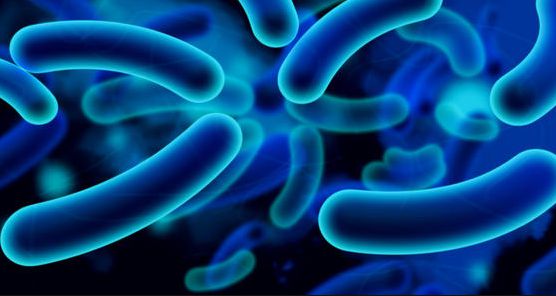 Bacilli are rod shaped bacteria. Bacillus is a single cell of bacteria.

There are following arrangements of bacilli.

The spiral shaped bacteria are spirally coiled. There are following forms of spirals:

Flagella and their Function

These are extremely thin hair like appendages. They originate from basal body and come out through cell wall. The basal bodies are present just beneath the cell membrane ¡n the cytoplasm. Flagella are made up of a protein flagellin. Most of the bacilli and spiral shaped bacteria have flagella. Cocci rarely have flagella. Bacteria are classified into different taxonomic groups on the basis of presence of flagella, pattern of attachment of flagella and the number of flagella.

The primary function of flagella is locomotion. Bacteria can detect a chemical signals with the help of flagella and move in its response. Such type of behavior is called Chemotaxis.

Pili and their Functions 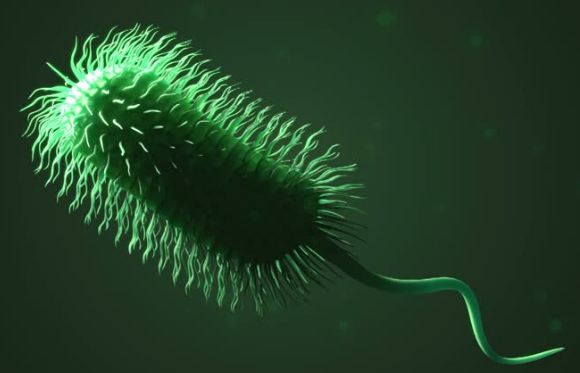 These are hollow, non-helical and filamentous appendages. Pili are smaller than the flagella. They are not involved in locomotion. True pill are present only in gram-positive bacteria. They are made up of special proteins called pilin. They are primarily involved conjugation. Conjugation is a mating process (reproductive). Some pili are used for the attachment of bacteria with various surfaces.

The Cell envelope: The outer wrapping of bacteria

Bacteria produce capsule. It ¡s made up of repeating units of polysaccharides or proteins or both. The capsule is tightly bound with the cell wall. It has thick and gummy nature. It makes the encapsulated bacteria sticky.

Some bacteria are covered with loose, soluble shield of macromolecules. These are called slime. Slime provides greater pathogenicity (power for causing disease) to bacteria. It protects the bacteria against Phagocytosis.

This technique was discovered by Christian Gram. Different bacteria show different response to gram staining procedure. So bacteria are divided into two groups on the basis of this response: 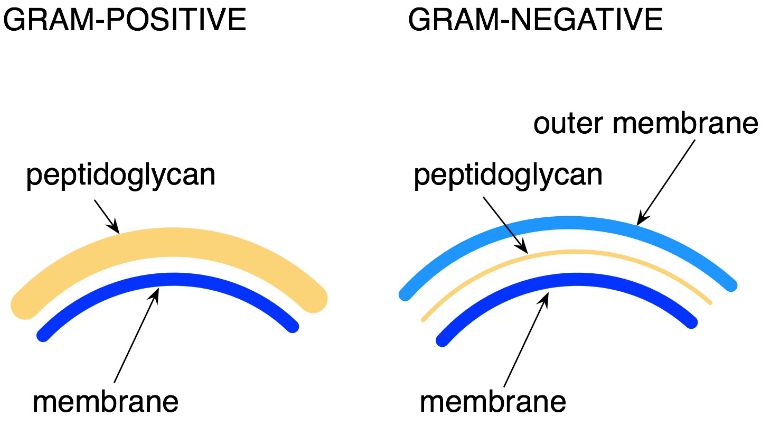 The cell wall of most bacteria has a unique macromolecule called peptidoglycan. Its amount is different in different types of bacteria. It is composed of long framework of glycan chains (glucose). These glycan chains are linked with peptide fragments. The intact cell wall also contains some molecules of sugar, teichoic acid, lipoproteins and Lipopolysaccharides. These molecules are linked to peptidoglycan. 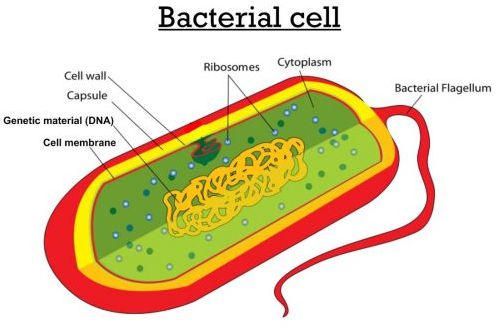 Cell membrane or plasma membrane is present beneath the cell wall. It is very thin and flexible. It completely surrounds the cytoplasm Plasma membrane is very delicate in nature. Any damage to it results in death of the organisms. The bacterial cell membrane is different from the eukaryotic membrane. It lacks sterols like cholesterol.

The cytoplasmic matrix is a substance present between the plasma membrane and the nucleoid. The membranous bound organelles and cytoskeleton (microtubules) are absent in the prokaryotic cytoplasm. It has gel like structure. Small molecules can move through it rapidly. The plasma membrane and everything present in it is called protoplast. Thus the cytoplasmic matrix is a major part of the cytoplasm. Other structures like chromatin/nuclear body, ribosomes, mesosomes, granule and nucleoid are present in this matrix.

Discrete chromosome and nuclear membrane is absent in bacterial cell. The nuclear material of DNA is present near the center of the cell. This nuclear material is composed of single, circular and double stranded DNA molecule. The nuclear material aggregates to form irregular shaped dense body called nucleoid. This nucleoid is also called nuclear body, chromatin body or nuclear region. It has very long molecule of DNA. This DNA is tightly folded and fit inside the cell components. Bacteria has single chromosome. So bacteria are haploid. Nucleoid is visible in the light microscope after staining with Feulgen stain. Escherichia coli closed circle chromosome measures approximately 14000 pm.

Many bacteria contain plasmids in addition to chromosomes. Plasmids are circular, double stranded DNA molecules. They are self-replicating bodies. Plasmids are not essential for the bacterial growth and metabolism. They contain drug and heavy metals resistant genes. Disease and insect resistant genes are also present on them. Plasmids are uses as vector in modern genetic engineering.

Ribosomes are composed of RNA and protein. Some ribosomes are also loosely attached with the plasma membrane. They are protein factories. There are thousands of ribosomes in each healthy growing cell. The ribosome of bacteria (70S) is smaller than the ribosomes of eukaryotes (80S).

The cell membrane invaginates to form mesosomes. Mesosomes are in the form of vesicles, tubules or lamellae. They perform following functions:

Bacteria live in an environment where nutrients are in short supply. The bacteria try to store extra nutrients when possible. These may be glycogen, sulphur, fat and phosphate. The cell also contains waste material. This waste material is excreted later on. Common waste materials are alcohol, lactic acid and acetic acid.

Certain species of bacteria produces spores. There are two types of spores:

Bacteria are divided into different groups on the basis of their mode of respirations:

The increase in number of cells of bacteria is called bacterial growth. Bacteria increase in number by asexual reproduction called binary fission. The parent cell enlarges during binary fission. Its chromosome duplicates and nuclear material is equally distributed in the cell. Its plasma membrane pinches inward at the center of the cell and divides the cell in to two. These divisions are repeated after fix intervals and new daughter cells are formed. The interval of time until the completion of the next division is known as generation time. After the completion of each division, the daughter bacteria grow and develop their unique features. So the population of bacteria is increased.

There are four distinct phases of growth in the bacterial growth curve: 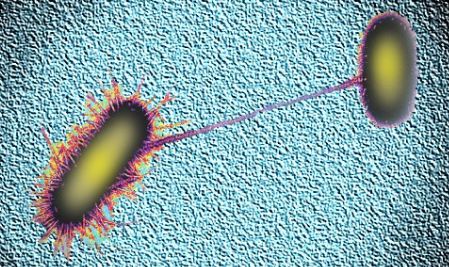 Traditional sexual reproduction (gamete formation) and mitosis is absent in bacteria. Some bacteria transfer their genetic material form a donor bacterium to a recipient bacterium during the process of conjugation. Some conjugating bacteria have specialized sex pili. These pili transfer genetic material. Conjugation produces new genetic combinations. These combinations help bacteria to survive in different conditions.

Difference Between Arteries and Veins 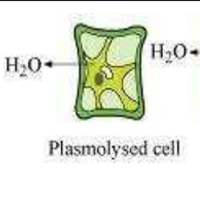