Soil is the medium of growth for plants and the plants are anchored in the soil, through their roots. Similarly, large amounts of water are continuously required by a plant during its life cycle. The water is largely absorbed from the soil by plants through their roots. Therefore, for a better understanding of the absorption of water the composition of soil and the anatomy of roots must be taken into account. 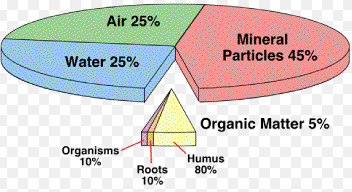 Soil is a heterogeneous mixture of inorganic mineral particles, decaying organic matter, and living microorganisms, along with air and various inorganic salts and organic molecules dissolved in water (soil water).

The mineral particles are present as sand, smaller silt, and still smaller clay particles. The sand particles exist as coarse sand and fine sand. In addition to these gravels are also found. These soil particles are known as soil fractions or separate.

The soil particles are classified on the basis of their sizes. A soil has a specific distribution of particle sizes. Soil texture refers to the size of particles that make soil.

Practically all soils are mixtures of sand, silt, and day. The soils with about lo to 25’’o clay and rest about equal parts of sand and silt are called foams. If the percentage of sand is more the loam is called sandy loam and if more clay particles are present than the normal ratio the loam is called clay loam.

Such soil lacks the oxygen necessary for root respiration. Similarly, root penetration is restricted in clay soils. But the clay particles provide sites for the adsorption of ions present in the soil solution.

The sandy loam and clay loam are considered to be the best soils for the growth of plants and agricultural purposes. These soils hold adequate water, have sufficient air spaces, and are easily penetrated by roots.

This results in the release of inorganic ions and C02 and colloidal organic residues are left. This is called humus and the process of formation of humus from dead organic matter is called humification.

Humus consists largely of dark-brown organic molecules rich in phenolic compounds derived mainly from the lignin of plant residues. The humic particles mix intimately in soil and form the matrix of the soil.

The humic particles are colloidal particles that become hydrated with water and provide adsorption sites for mineral ions present in the soil solution. These ions become available to plant roots for absorption. Further degradation of humic particles results in the formation of minerals in a process called mineralization.

Water is the second-largest component of the soil. Most inorganic chemical compounds and organic molecules present in soil are soluble in water; therefore the soil water is termed as soil solution.

The water in the soil exists in various states such as:

Water Contents of the Soil

The content and composition of soil air are determined by the water content of the soil since air occupies those soil pores not filled with water. Therefore, poorly drained soils are poor ¡n air contents thus affecting the growth of plants and soil microbes.

5. Soil Organisms: Soil accommodates a diverse population of diverse populations of living organisms, both animals and plants. These range in size from rodents and large tree roots to worms, insects, and soil fungi and bacteria, these organisms influence the physical, chemical, and biological properties of soil.

What are the 5 components of soil?

Answer: the soil is composed of mixtures of different components. the major 5 components of soil are water, air or gases, minerals, organic compounds, and microorganisms.

What is soil composition and properties?

Answer: the composition of soil includes the ratio of air or gases, minerals, organic compounds, and microorganisms, etc. Textures, structure, porosity, chemistry, and color are called properties of soil.

What is normal soil?

Answer: if A soil having a profile less or more in equilibrium with our environment is known as normal soil.

What are 2 main ingredients of soil?

What are the three main layers of soil?

Answer: the layers of soil are divided into three horizons which are as follows: 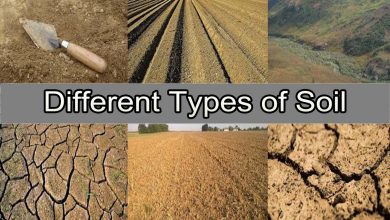 12 Types of Soil: Classification and Characteristics