PHLOEM TRANSPORT: The plant body consists of organs specialized for various functions. Its roots are meant for absorption and anchoring the plant in the soil and leaves are responsible for photosynthesis. These plant parts contain specialized conducting tissues, xylem and phloem.

The water and minerals absorbed by roots is transported to aerial portions of the plant (leaves) by xylem. The phloem translocates the products of photosynthesis from mature leaves to areas of growth and storage. The phloem also serves to redistribute water and minerals that reach the leaves. Similarly, certain hormones synthesized in specific parts of the plant move to other parts via phloem.

The Pathway of Translocation of Organic Solutes Girdling

The experiments that helped us to understand transport of organic solutes were first performed by an Italian anatomist Marcello Malpighi (1686) and later by Hales (1727), and Mason and Maskell (1926). They removed the bark of a tree in a ring around the trunk (a phenomenon called girdling) and found that there was no immediate effect on movement of water as transpiration continued to take place.

However the sugar transport in the trunk was blocked at the site where bark has been removed. Sugars accumulate above the girdle (side towards the leaves) and the bark below the girdle dries up and eventually died.

The experiments suggested that sugar transport occurs in the bark (phloem) of the tree. Later on experiments with dyes, especially dye fluorescein, confirmed movement in phloem cells, especially sieve elements.

In another experiment labelled sucrose was applied to the leaf surface directly after removing the epidermis. The labelled Sugar appeared in the sieve elements.

A Junction can often be understood by understanding the structure in which it occurs. For example; an examination of valves and chambers of the hear makes its function as a pump clear to anyone. Similarly mechanism of phloem transport can be understood by studying phloem anatomy. 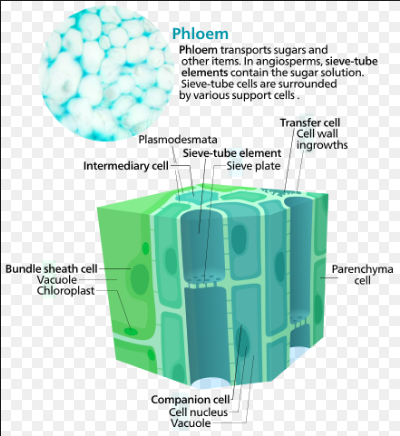 Phloem is a heterogeneous tissue composed of four different types of cells (sieve elements, companion cells. Phloem parenchyma cells and phloem fibres) that are similar in origin and major function but differ in structure.

Sieve elements are elongated living cells, usually without nuclei at maturity. These are the cells in which translocation actually takes place. In aviosperms, they are connected end to end, forming long tube-like series of cells known as sieve tubes. The sieve elements are characterized by sieve areas, portions of cell wall where pores interconnect the conducting cells. A mature sieve element is highly vacuolated with cytoplasm in the form of a thin layer closely appressed to the cell wall. 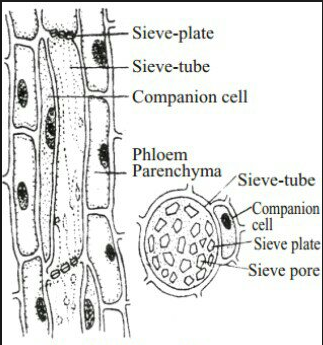 Minute bodies called slime bodies formed of P-proteins are present in the cytoplasm. The apparent function of P- proteins is sealing off damaged sieve elements by plugging the sieve-plate pores.

Smooth endoplasmic reticulum is present as continuous network in the cytoplasm. Mitochondria and plastids sometimes containing starch, protein or both are also present in the cytoplasm. Walls of mature elements are non-lignified, rich in cellulose and thick.

Each sieve element is associated with one or more companion cells, arising from the same mother cell as the sieve element. Both the cells are connected through plasmodesmata, suggesting a close functional relationship between the two cells.

The phloem parenchyma cells are thin-walled. Cells those are different from other parenchyma cells in that these are elongated. They may transport solutes and water or act as storage cells. Phloem fibres are thick walled cells which are usually grouped in a bundle. The major function of phloem fibres is to provide strength. In some species these act as storage cells.

The vascular anatomy of the minor veins in leaves is especially important to an understanding of phloem transport. The large veins in a leaf branch into smaller veins and eventually into the minor leaf veins.

Each minor vein may contain only one vessel representing xylem and one or two sieve tubes surrounded by companion cells. Phloem parenchyma cells are intermingled with the companion cells and it separates phloem tissue from the xylem. Photosynthesizing mesophyll cells are in close contact with the minor vein.

Role of Sieve Elements in Translocation

There is consensus, of opinion among specialists in the field of phloem translocation that a sieve element becomes capable of translocation of organic solutes when, it reaches maturity. The lumen provides space for accommodating larger amounts of sugar and sieve pores in the end walls permit free flow of sugar solution from one sieve element to the other.

The thin layer of cytoplasm lining the vertical walls provides a differentially permeable membrane across which a difference in sugar concentration (between apoplast and symplast) is maintained, permits water movement (osmosis) across it and allows active transport of sugar molecules during loading and unloading.

The girdling experiments revealed another important fart. When the bark between a leafy branch and developing fruit is removed, the sugars accumulate in the bark on the side of the leafy branch.

Similarly the bark was removed below shoot tip i.e. above the leaves; the sugars accumulate in the bark on the side of the leaves again, at the bottom of the girdle. This suggest that gravity does not govern the movement of materials in the bark, rather the assimilates move from source to sink.

The regions supplying sugars to the phloem are referred to as sources. Primary sources are green leaves because of their photosynthetic capacity. The sugars produced in these leaves are transported to other parts of the plant. Also the plant parts, for example, root (beet root that store food one season and supply it next growing season), tubers, endosperm, cotyledons, etc., in which food materials are stored, serve as sources.

The regions of the plant that utilize sugars translocated in the phloem are referred to as sinks. Any growing, storing or metabolizing tissue might be a sink, for example growing fruits, stems, roots, corms, tubers, flowers, or young leaves. As a general rule sinks are supplied mainly by nearby sources.

Aphids, small insects that feed by inserting their mouthparts consisting or four tubular stylets into a sieve element of leaf or stem, helped in identification of material translocated in the phloem.

The high turgor pressure in the sieve element forces the cell contents into insect’s gut, where amino acids are removed and some sugars are metabolized. The excess sap, rich in carbohydrates, is excreted as honeydew, which can be collected and chemically analyzed.

This method is advantageous as the aphids puncture a single sieve element, so there is no problem of contamination from other cell types. The exudation from severed stylets continues for hours suggesting that aphids prevent normal sealing mechanisms.

Analysis of phloem sap suggested that water is the most abundant substance transported in the phloem. Solutes dissolved in the water are carbohydrates mainly. Sucrose is the most common sugar transported in sieve elements. The concentration of sucrose ranges from 0.3 to 0.9 M. 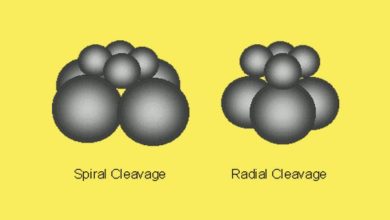 What is the difference between Spiral Cleavage and Radial Cleavage? 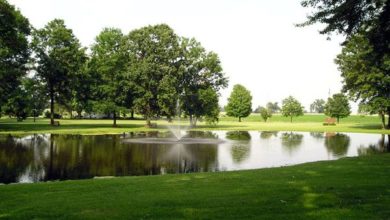 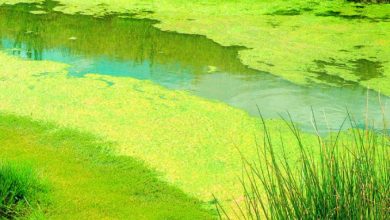